B is for Babu

This is the third blog of a five-part series to unpack the meaning of some of the frequently heard terms and phrases in the Indian bureaucracy.

Group C officer who is the lifeline of government offices. Generally considered to be in short supply.

In the colonial days, babus were the anglicised brown sahibs who were in a league of their own, sometimes admired (for their proximity to the Raj, their capacity to affect lives, and their lifestyle) and sometimes despised (for the same reasons as they were admired) by the masses. Post-independence the meaning associated with the term babu gradually shifted as the general perception of the bureaucracy’s functioning came to be associated with decadence and inefficiency in the layperson’s lexicon.  But within bureaucratic corridors, no such feeling is attached to the term.

A babudom without babus?

Within the bureaucracy, the babu is a Group C officer which includes mainly the technical, non-technical, and non-gazetted administrative staff. Babus, in fact, are the lifeline of government offices. “Babu ki kami hai!” (there’s a shortage of clerks!) is an all too familiar concern shared by government staff in the mid and lower level offices.

The bulk of work at the mid and lower level offices across departments comprises of processing and maintaining large volumes of data coming from frontline to higher government agencies.  And babus are the ones who are responsible for filing, checking, collating, maintaining and transmitting facts, figures and records. Since I’ve heard the same story of clerical staff shortage coming out of seven different states and multiple departments, I am led to believe that this must be a large scale issue in the country.

Once you are in a government office, it is wise to ask around for the Mr/Ms. Know-it-all of the office. There’s almost always that one babu who knows the full story of their office and its workings, and they are also likely to be the most overworked. General respect for her dedication and efficiency comes at a personal cost. Their phone number is on speed-dial of the officer in-charge, and they regularly work over-time. It’s bad enough they have an additional work load on them owing to staff shortage, but they often end up taking on tasks assigned to their (to put it softly) more easy going colleagues.[1]

Babus in the digital age

Now, one may argue that staff shortage should not be viewed as grave an issue as it appears to sound. We are living in the times of e-offices and ‘Good Governance’ which means the belief is that once offices are fitted with technological apparatus, office efficiency will increase, therefore we would not need as many babus to manually wade through files, scribble away in dusty registers, and engage in other such “dated” practices. Outside of the fact that India has about a fifth as many public servants compared to the US relative to its population, most offices continue to struggle with the “electronic” part of “e-office.”  The attachment to the thick cardboard bound sarkaari file continues and does not appear to have significantly weakened with time even though the rhetoric of good governance has permeated. Cabinets and office corners stacked with hardbound folders in government offices are a testament to this abiding love.

Caught in a web

To sum it up, it looks like there may be a large scale shortage of clerical staff in government offices across the country. Those babus who are actually doing their job seem to be overworked as they end up taking on other officers’ responsibilities. Those who take things lightly get to do so because of the lax or skewed accountability structures that are in place. The rhetoric of efficiency/good governance is something that all government officials are well familiar with. But the technological infrastructure, technical know-how, and a culture of working with the new tools is still severely under developed.  The babu, therefore, is the work horse of the government office, who works with blinkers on for all the above mentioned reasons.

Another reason why mid and lower level officials function the way they do is due to their fixation with government circulars. At the end of the day, the work of the babus (and their superiors) is driven by orders sent from above in the form of circulars and office orders. Government circulars are to government officials what passages from religious books are to the faithful. And like the religious, the potential to turn fanatical is just as high within the bureaucracy. In her next blog, Taanya will shed light on the power circulars hold over government officials.

[1] For a discussion on the prevailing work culture specific to the education bureaucracy, read the following blog post here.

Vincy Davis works with the Public Administration team at Accountability Initiative. Currently, she is conducting field work for a project which involves analysing the implementation process of key government interventions in education in the NCT of Delhi. 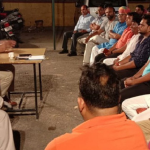