‘There are hardly any Administrative Problems with no Solutions’: Interview with OAS Rumana Jafri

The bureaucracy is considered to be the steel framework that makes the country’s development aspirations a reality, but little is understood in the public about the people behind the scenes. State Speak is an exclusive interview series by the Accountability Initiative featuring insights from IAS officers posted in India’s districts and other public officials who have a vantage point on how the country is being governed, related challenges and best practices.

In this interview, we spoke with Rumana Jafri who serves as a Tehsildar in Khordha district of Odisha. She is an Odisha Administrative Services officer from the 2015 batch.

Q.You were the first woman Block Development Officer (BDO) in Madanpur Rampur Block of Kalahandi district, and you are now the first woman Tehsildar in Jatni Tehsil of Khordha district. As a woman, have you faced any challenges on the field?

Rumana Jafri: Yes, it is very challenging, especially during field visits where you have to go to very remote areas and the staff along with you are mostly male. So, even if you are facing any issues, let’s say you have something you want to discuss and it is a very gender-specific issue, you have to think twice.

There are other issues too. For instance, Kalahandi is seeing a Maoist insurgency. There were many people in my staff who would not want to accompany me thinking that, “she’s a lady, if we go with her it would be very risky because if something happens to her, then we all would have to answer why didn’t we do this or that for her?”.

Otherwise, when it comes to work, there was no discrimination. There is a lot of work, whether you are male or female, and you have to put in hardwork and have to do it.

Q. You spoke of self-doubt. How have you managed or overcome this?

Rumana Jafri: When people put you in certain situations where you doubt your own capabilities, the first thing that I did was that I took it up as a challenge and I, without assigning or delegating the task to anybody else, would myself go and visit the remote spots in the block. If somebody would tell me, there are no roads, there is no electricity, or no network there and I can’t reach those places because I have to cross four mountains or the like, I still used to make those visits myself. This way people know that the administration is reaching them.

As an individual, I also assured myself after that there is no place under the jurisdiction of the BDO that cannot be reached. If you have a will to reach those places, you can definitely reach them! During this time I found that it is very important to actually ask people what they want. So when I used to go to these villages and I used to conduct Gram Sabhas or Palli Sabhas, I used to actually ask them what they wanted. What happened is people started connecting with me and even I started connecting with them. So this self-doubt slowly went away.

Q. And how did the community interact with you?

Rumana Jafri: I still remember, when I was in Madanpur Rampur, we had collectively tried to stop child marriage, which is very prevalent there. People started talking about how this could be stopped. Then they started talking about why not build certain schools in this place. Girls have the highest dropout there, as the schools don’t have proper bathrooms, etc. Earlier, they were not able to tell these problems to any, let’s say a male administrator, but then ladies would come and tell me that this is the issue.

They would also tell me things like we want to form a Self-Help Group, or that we want to sell but nobody understands that our products are important. So, can you just make a community hall or something like that for us? And they would think that because the administrator is also a lady, she would relate with our issues.

I always try to stay updated on current issues in the block and find solutions. Don’t just say that, okay, this is something, and this is beyond guidelines and we will not do it. Always try to have a convergence with other departments, always try to bring in other people from other Line Departments and other fields and ask them what could be other potential solutions. And I’m very much sure that solutions will come up. I mean, there would hardly be any administrative problems which will not have a solution. The only point is who’s going to take that pain and reach there.

Q. What were your major responsibilities as a Block Development Officer and how have they changed now as a Tehsildar?

Rumana Jafri: When you are a BDO, it is more about giving benefits to the people directly, in terms of let’s say PDS (Public Distribution System), in terms of housing, in terms of IHHL (Individual Household Latrine) or MGNREGS (Mahatma Gandhi National Rural Employment Guarantee Scheme). But, as Tehsildar, there is a lot of protection of government assets that you have to do. You have to protect government land from encroachment, and if somebody has encroached, you have to evict.

It’s more of a community-based thing that we have to do in the post of a Tehsildar. But as a BDO it’s more of an individualistic thing. [For example] If a single person has not got pensions, we have to look after that.

Also, managing is very different for both the posts. As a BDO, you have to be very much connected with the ground-level workers, with the PRI (Panchayati Raj Institution) members and with other Line Departments. But, as Tehsildar, the role of PRI is reduced.

As a Tehsildar, a risk factor is there, which is enforcement of theft of minor minerals, or let’s say theft of sand, theft of laterite stone, etc. I have to conduct raids.

Q. Kalahandi is resource rich and yet falls behind on development indicators. At one point it was notorious for rampant hunger. This is why there has been a substantial focus of government schemes. What are the district’s major development challenges now?

Rumana Jafri: Kalahandi is still very inaccessible. The participation of women in the decision-making process is very poor. There is a Maoist insurgency. The style of work of the people themselves too is different, and there is a fixed mindset of how they will work. So this is also one reason why that area is not able to develop very fast because, as administrators, we are outsiders and we have a very limited tenure there.

I would generally see that only 10 per cent to 30 per cent of the houses were built in a year, out of which less than 15 per cent got incentives. When I started visiting, I saw that there were many people who felt that bricks should not be bought but should be made by themselves. They thought that they were saving on costs, but it takes time to make the bricks, and hence they started construction later losing out on incentives.

I explained the difference. Next year, we saw that maybe about 25 per cent people got the incentive.

If administrators are sensitive enough, then there are so many issues that they can pick up. And slowly, these ideas can percolate in the minds of people and these changes can come about, but it is a slow process. How long an administrator is staying in the place, and how much interest they are showing, again depends.

Q. How is Jatni different from Kalahandi? What as per you are the stark development challenges?

Rumana Jafri: Jatni is a very recent Tehsil, it was formed in 1996 and is an offshoot of Bhubaneswar tehsil. There are a lot of land issues here and there are mining problems, as well as problems with the sand mafia. So these topics are very different. In Kalahandi, if you are not doing something, there are a lot of chances that it will affect the community. Let’s say the housing incentives example. If the target is to construct 1,300 houses under the scheme, but only 800 are constructed, the chances are that the next time the target will be set lower. So, the remaining people will lose out. The issues in Jatni are more individual that way.

Q. India is celebrating the 75th year of independence. What do you think will be the role of public administrators going forward?

Rumana Jafri: Young administrators have to know four things. Number one, please do your work on your own. Delegate only when you are updated about the status or when you have stayed in that place for a year or two, and you have other people whom you can call and take the status. The more you visit, the more things become clearer to you.

Second, connect with people. Don’t go there and be a snob. I always tell the public who come to my office to sit down, have water, and they ask “ma’am why do you behave so well with the public?”. Because of the public, we are there. If tomorrow all the issues of these people are solved, all of these offices will be closed! We exist because the public exists.

Third, feel the problems are your own. If this would have happened at a place where I was staying, how would I feel? And always try for convergence mode, always try to activate other Line Department as well.

Fourth, while talking to people, always try to find out what they want.

Q. What do you think would be India’s governance challenges in the coming 10 years?

Rumana Jafri: First is the overload of information that now citizens have access to, some of which might be wrong. Second is unethical journalism, where it leads to defaming people, defaming administrators. 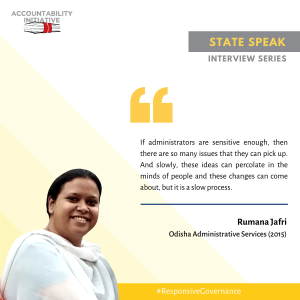 This interview has been edited for length and clarity.

The opinions expressed are personal and do not represent an institutional stand. 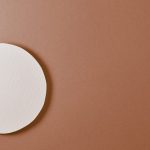 Last month, on the 75th anniversary of Independence… 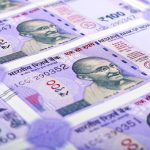 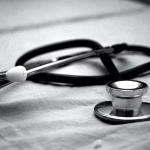